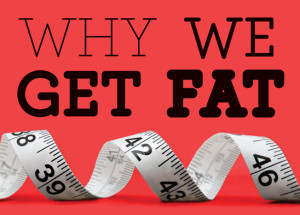 To say the least, I’ve been busy.  Too busy to blog, but not too busy to read.  When my youngest recently started driving, I finally felt I had time to share some of the more thought-provoking books I’ve read over the last year on the science of exercise and nutrition.  One of these was Gary Taubes’ new book “Why We Get Fat:  And What To Do About It”.

If your trainer has lead you to believe that “it’s all about calories in, and calories out”, it is time for you to find a new trainer.   It’s a misleading theory and a good sign your fitness professional is not well-educated – relying on old, outdated research or the oft-misinformed fitness magazines to get you in shape (like Dr. Oz).

For the most part, new nutrition research (i.e., Nutrition Science Initiative)  is attempting to move beyond “calories in, calories out”, focusing more on the complicated processes at play that determine if energy is stored or expended.  Whether energy is stored as fat or burned as energy is determined by numerous complicated bio-chemical interactions: how our bodies respond to different macronutrients, the variety of hormonal conditions and mechanisms that signal your body to do something at any given time, our genetic makeup and epigenetic expression, our physical environment, etc.

For years, medical professionals, fitness and nutrition experts have relied on the First Law of Thermodynamics to explain why we gain weight:  if you eat too much and exercise too little, you will get fat.   In Gary Taubes’ new book “Why We Get Fat: And What To Do about It”, he addresses the numerous conditions involving excess fat storage that cannot be explained via the positive caloric balance hypothesis:

Occam’s razor  states the hypothesis that makes the fewest assumptions is most likely to be correct.  After reading this book, it is becomes glaringly obvious that there are too many flawed assumptions in the “calories in, calories out” hypothesis for it to accurately explain why we have an obesity epidemic in this country.   Although you can gain weight from eating too many calories, this theory does not accurately explain why we are getting so fat.

Is Taubes trying to say that the universally accepted First of Law of Thermodynamics is flawed?  No, but he does not believe it provides an accurate explanation of “why” we are getting fat.  Once again, “calories in, calories out” becomes another case of assuming causality.  Peter Attia, MD of The Eating Academy has written an excellent blog post explaining how the First Law of Thermodynamics has been erroneously applied to explain excessive weight gain.  Click on the image below to read his excellent explanation.

So, why do we get fat?   Gary Taubes furthers the discussion by exploring several obesity hypotheses that have developed through the years around the world.  Based on his extensive review of the literature (“Good Calories, Bad Calories“, and beyond) he comes to the conclusion that excessive weight gain is due to a metabolic defect.  In addition to this defect, once the fat has accumulated in excess it creates another host of metabolic disorders that exacerbate the problem.  Overeating and lethargy become side effects, not the cause of obesity.

To better understand how this metabolic defect drives obesity, Taubes reviews basic information that would be taught in any Biochemistry 101 college course.  Fatty acids are burned as fuel for energy production.  Combine 3 fatty acids with a glycerol and you’ve created the storage form of fat – a triglyceride.  The more fatty acids that that enter  the cell and are attached to a glycerol and are stored as triglycerides, the fatter you will become.   The more triglycerides within the cell that are broken down and released to be utilized as energy, the thinner you will become.  Insulin is the hormone that regulates this process.

As I have discussed in my nutrition lecture since 2009, it’s common knowledge that insulin is known both as the “storage” and “locking” hormone.  Insulin is responsible for driving glycerol into the cells so that the fatty acids can be converted into triglycerides for fat storage.  These triglycerides are also locked into the cell when insulin is present.  Insulin must be low for cells to release fat stores to be utilized for energy.  Insulin is also a dominant hormone, and when present will override other hormones that signal the body to burn fat (i.e., growth hormone, adrenaline, epinephrine, and glucagon).

What triggers the pancreas to produce insulin? Rising blood glucose levels.  What causes blood glucose to rise? The consumption of carbohydrates – specifically the dense, starchy carbohydrates found in bread, cereals, pastas, and, of course, sugar.    Constant consumption of dense, starchy carbohydrates will result in constantly high blood glucose levels which makes glycerol available to bind to fatty  acids which in turn creates the storage form of fat (triglycerides).  From Tolstoy to Dr. Spock, Taubes shares numerous documents that reflect over 150 years of understanding that carbohydrates make us fat.   In addition, chronically high insulin levels have also been correlated with inflammation.  Inflammation has been implicated in metabolic syndrome, Cardiovascular Disease, Alzheimers and other diseases of modern civilization (click here to see the results of  a simple “Google Scholar” search).

Occam’s razor would lead you to conclude that after reading this book all one would need to do to be healthy and lean would be to simply keep insulin levels low.  By keeping insulin levels low, you can avoid excess fat accumulation as well as avoid future diseases associated with inflammation.

Sadly, Ancel Keys and the low-fat movement have led us to fear the one nutrient that does not raise insulin levels – fat.   We are sicker and fatter than ever.

P.S. – By the way, The Paleo Diet is a naturally low-carbohydrate diet! 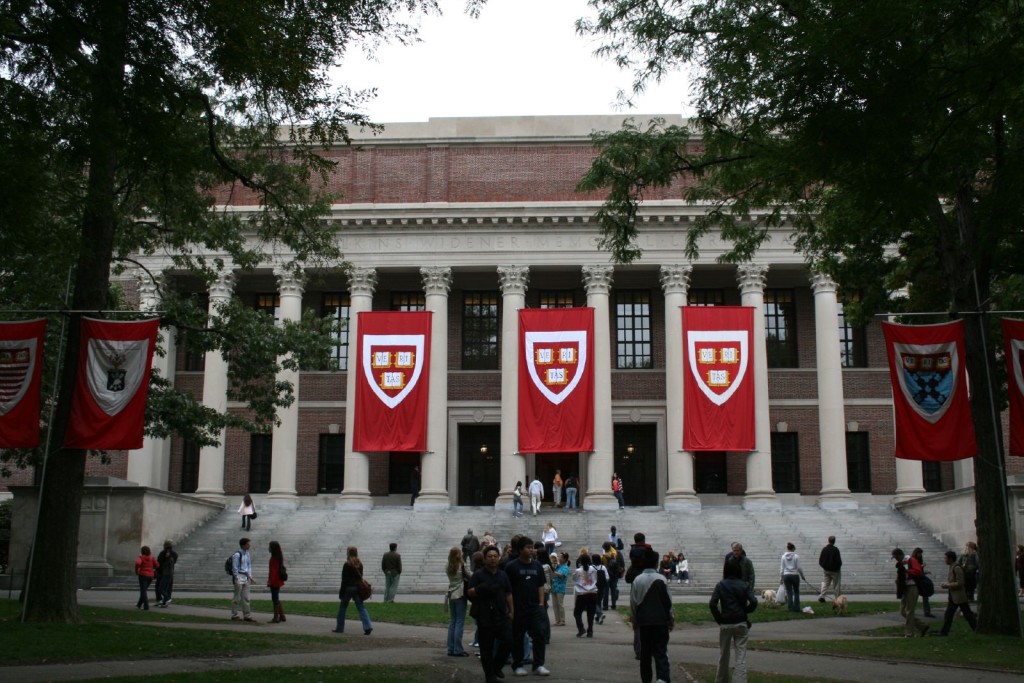 I grow weary of my Ivy League friends citing correlative nutrition studies which rarely show  causation  and are very misleading to the general public (see “Science, Pseudoscience, Nutritional Epidemiology, and Meat?”).   It now appears that at least Harvard is finally coming around.    In addition to the Harvard Food Law Society hosting the 2012 Ancestral Health Symposium (see video presentations and  abstracts here), recently the Harvard Gazette reported what the Paleo community has been proclaiming for years:  grains can have a negative impact on your health.

The Harvard School of Public Health took a second look at the “Whole Grain Stamp” and“found that grain products with the Whole Grain Stamp, one of the most widely used front-of-package symbols, were higher in fiber and lower in trans fats, but  also contained significantly more sugar and calories compared with products without the stamp”.   High sugar is obviously not a good idea if you have metabolic issues (see “Robb Wolf:  Paleo Nutrition Guru”), are trying to lose weight, or  if you have cancer (more on this in another blog post)!

Although the so-called “nutritional experts” are slowly coming on board, there is still very little discussion on how anti-nutrients found in grains can affect the health of your gut (see “Got Leaky Gut?”).   The wheel of progress grinds exceedingly slow.

Maybe I should be more impressed that William Davis, M.D, cardiologist, author of the successful “Track Your Plaque” program and the New York Times bestselling book  “Wheat Belly” recently convinced the oft misled Dr. Oz that bread raises blood sugar more than a candy bar. You can watch the video here or by clicking on the photo below. 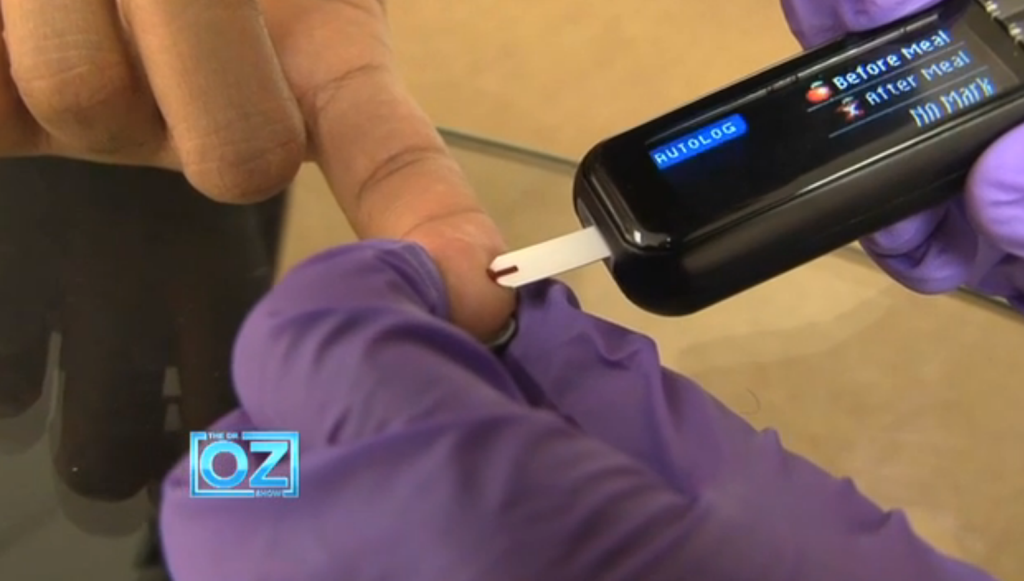 Mark Hyman, MD recently wrote an excellent article in the Huffington Post titled “Gluten:  What you Don’t know Might Kill You”.    As Dr. Hyman summarizes in his article, gluten sensitivity is widespread and is now understood to go beyond Celiac Disease.  New research confirms that gluten (wheat) consumption can now be linked to the cause of over 55 diseases from irritable bowel disease to autoimmune disease:

“…Gluten Sensitivity: One Cause, Many Diseases

A review paper in The New England Journal of Medicine listed 55 “diseases” that can be caused by eating gluten. (iv) These include osteoporosis, irritable bowel disease, inflammatory bowel disease, anemia, cancer, fatigue, canker sores, (v) and rheumatoid arthritis, lupus, multiple sclerosis, and almost all other autoimmune diseases. Gluten is also linked to many psychiatric (vi) and neurological diseases, including anxiety, depression, (vii) schizophrenia, (viii) dementia, (ix)migraines, epilepsy, and neuropathy (nerve damage). (x) It has also been linked to autism.(ix)

We used to think that gluten problems or celiac disease were confined to children who had diarrhea, weight loss, and failure to thrive. Now we know you can be old, fat, and constipated and still have celiac disease or gluten sensitivity.

Gluten sensitivity is actually an autoimmune disease that creates inflammation throughout the body, with wide-ranging effects across all organ systems including your brain, heart, joints,digestive tract, and more. It can be the single cause behind many different “diseases.” To correct these diseases, you need to treat the cause–which is often gluten sensitivity–not just the symptoms…”

To read his article in full click on the link below:

END_OF_DOCUMENT_TOKEN_TO_BE_REPLACED

Gluten sensitivity is widespread and is now understood to go beyond Celiac Disease. New research confirms that gluten consumption can now be linked to the cause of over “55” diseases from irritable bowel disease to autoimmune disease.

Paleo Diet in the News

We were pleasantly surprised to learn Dr. Servan-Schreiber’s Anticancer diet recommendations are very similar to those of The Paleo Diet – both diets recommend avoiding all sugars and processed foods.

This is exactly why I don’t follow the advice of traditional Registered Dietitians.Tamara Abraham reports that readers polled on the US News “Best Diets Overall” ranked The Paleo Diet as the MOST effective of all diets ranked by the so called “experts”!

I am glad to find that you have your website up, and that you continue to take your knowledge, training and overall expertise to yet another level.

During the 6 weeks that I worked with you last summer, I lost 14 pounds and improved my diet and lifestyle as well as my ability to adequately perform different exercise routines. My fasting insulin decreased by half. For the first time in 2 years my lipid profile normalized - even increased the HDL without the need for statin therapy!

I am now using much of your advice and your recommendations with my patients.

Thanks so much. I am looking forward to working with you again soon.